Use hashtags to bring new followers to you

IG posts without hashtags are only visible to your existing followers. Using hashtags can bring non-followers and potential customers to you in two ways:

A study by later.com (a hashtag analytics platform) shows a post with at least one IG hashtag averages 12.6% more engagement than a post with no hashtag.

Be careful not to overuse hashtags

This may be counterintuitive, but when you add too many hashtags to an IG post, it can lower engagement.

Too many hashtags can dissolve the engagement for each keyword. IG’s algorithm ranks posts with fewer hashtags higher than those with numerous hashtags. Speculation (IG isn’t telling) is that IG is matching specific niche content to specific searches. If you have a bunch of hashtags, IG doesn’t know who your post is targeting.

Let’s compare a post of a cupcake with a single hashtag (#cupcake) with the same post with more hashtags (#cupcake, #cupcakelove, #cupcakefordays, #cupcakedecorating and #cupcaketoppers). The former will show up first in search results of #cupcake.

At the same time, too many hashtags make your posts look just a bit desperate for attention. Many users find posts with more than 10 hashtags spammy, so they will not click through.

So how many hashtags can optimize the engagement of a post? A study conducted by Social Insider in 2019 shows that IG profiles with fewer than 5,000 followers have performed best when using six hashtags in the caption. 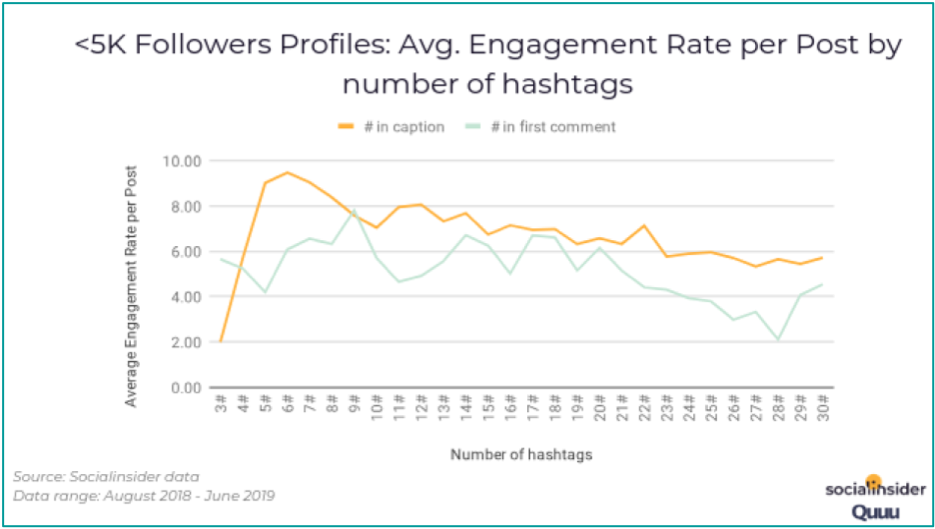 Use hashtags that define your niche

It’s better to use hashtags that are very specific to your business offering because they will grab the attention of the audience most interested in your service or product, according to later.com.

IG introduced hashtags to categorize information so the right content finds the right user.  The best hashtags are the ones that perfectly describe your post. For example, if you’re posting a cupcake photo, #cupcake, which is exactly what it is, might be your starting point. To define the content further, you can add #recipe or #design for vastly different searches.

But what about ubiquitous hashtags such as #love or #happy? Put yourself in the shoes of an IG user. If you want specific ideas before starting to bake cupcakes, would you put the hashtag #love in the search field? Probably not.

What’s more, 606 million posts use #happy on IG. That means your post is competing for attention with 606 million other posts! What’s your chance of being seen by a user in this?

Also, avoid the fluff and think about your buyer persona. As with all communications about your business, being specific about what you offer is always the way to cut through the noise.

Add your business to the NYWIB Business Directory

The NYWIB Business Directory is the place to be found. We’re featuring businesses on our website and staying in touch on social media. If you’re looking to join a supportive network of women businesses or ways to partner with other businesses…

0
Your Cart
Your cart is empty
Add more weeks